I had my eyes closed and was praying for Dominic before he went to work when it happened. BAM! He slammed into the F-150 in front of our Subaru Forester. I screamed at the top of my lungs, which made Rocco wake up screaming. And after realizing we were all ok, my first thought was, “Can I still go teach my Thai cooking class??”

We were approximately five seconds away from Dom’s work, and then after we dropped him off, I was going to teach my first Thai cooking class to the Moms of Preschoolers group at my church. But now my tom yum had leaked out of one of the crock pots all over car Alejandro, like it was anointing oil at his funeral.

While Dom got the insurance info from the guy he had rear-ended, I moped pitifully in the car and hung out with Rocco who was laughing and smiling at the cars that drove by us staring or honking at our misfortune. Thankfully the F-150 wasn’t damaged and the guy was fine, just grouchy because he was late for work. As I waited, I called my friend from MOPS, crying as I let her know we had been in an accident.

She said she was just about to leave, and offered to pick me up. So once she pulled up behind us, we transferred Rocco, my tom yum soup crock pots and three bags of Thai cooking ingredients into her cozy minivan, and drove away from the accident scene to church. When we arrived, everyone quickly jumped to the van to bring in all my supplies, gave me hugs that calmed my spirits, plugged in my crock pots and helped me get my class set-up. 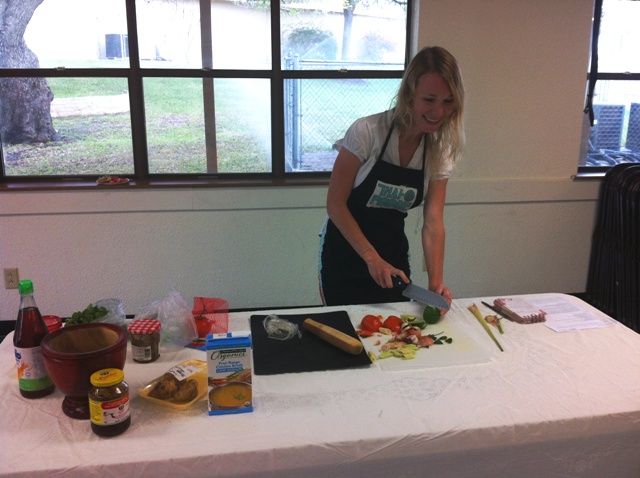 As I prepped in the room, I felt like I had years before when I taught SAT Writing in Thailand. I read over my lesson plan, rewrote it, added in new things, all a few minutes before my students walked in. While I organized my tom yum soup ingredients on the table, the car accident zoomed away as I escaped to my Thai cooking world.

Since there wasn’t a kitchen available, I pretended I had my own Thai cooking show and that my 30 students were my audience. I showed the ladies how to chop tricky ingredients like lemongrass and galangal, and let them in on the secret of how I found kaffir lime leaves at Central Market after going to six grocery stores in Austin. I demonstrated how one of my Thai friends taught me to how to chop a lime, so you can squeeze out the juice easily, which received many oohs and ahhs. And I passed around all my Thai cooking ingredients, so they could smell and touch them. 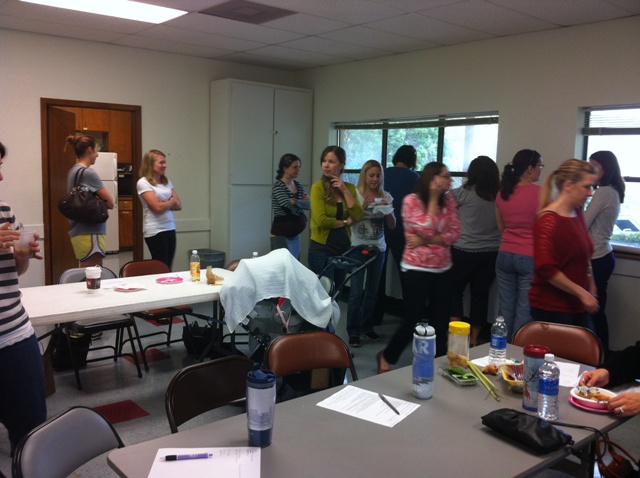 Basically I went through my tom yum soup recipe step by step, and at the end I asked if there were any questions. I thought it was going to be tough to get anyone to ask questions, like it always was with my Thai high school kids, but hands shot up all over the room. These ladies were so curious about Thai cooking and culture, and I loved it.

Finally I had to end the class so they could taste the tom yum soup before picking up their kiddos from nursery. Good thing I only put in three chilis because everyone said it was spicy, but not too much. I put shrimp in the tom yum the night before, but forgot that reheating the soup in the crock pot would cook the shrimp even more. So they weren’t quite the texture I liked, but after our car accident, I was just glad there was still enough tom yum  soup left to serve. 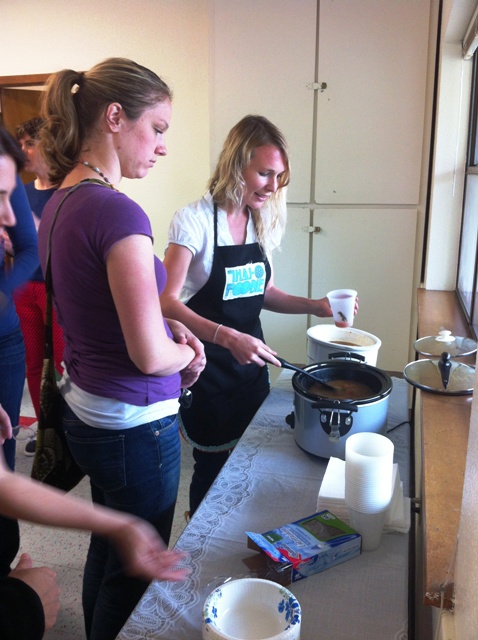 After the class ended, I discovered how much of a thrill and a joy it was to teach Thai cooking. I loved sharing my knowledge and helping these moms add Thai cooking to their cooking repertoires. But I was sad that I had to go back to reality and see what happened to our car.

It turns out even though it was just a fender bender, our car was declared totalled. We will miss our dear Alejandro,  but I’m glad some of our tom yum soup will be with him forever.

And with the money from the insurance company we were able to get a Surbaru Outback, Suzy, who is younger and we hope even better than Aljeandro. So it all turned out for the better! 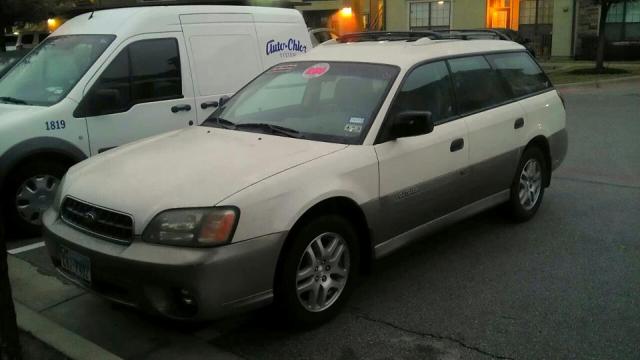