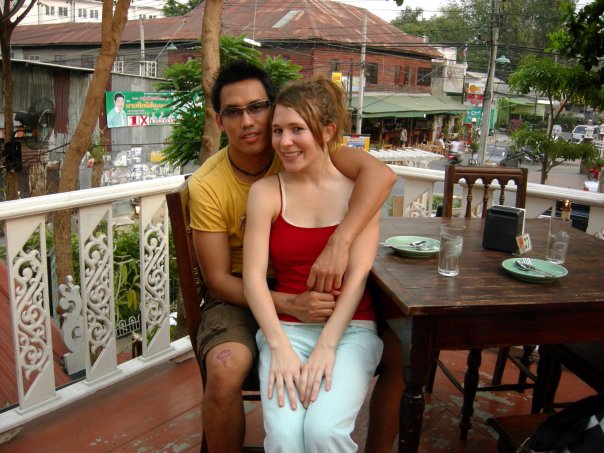 Dom and I on one of our first dates in Thailand. He asked me if I had eaten yet. I said no. He fixed that.

Dom called me during his lunch break the other day. After saying hi we both started to say the same time in Thai, “Have you eaten yet? What did you eat?”

I giggled at how Thai I’ve become.

In Thailand instead of starting out a conversation with good ol’, “How are you? What’s up?” etc., it’s always, “Have you eaten yet? What did you eat?”

I always loved asking my Thai friends this—it inspired me. If they answered, “I just ate pad kee maw,” I would think I haven’t had that in awhile, and a few hours later I would be devouring it at a metal table on a busy Bangkok street.

Recently I asked one of my Thai friends why they greet each other this way (Dom didn’t know 🙂 ).

“It’s a way of looking out for the other person’s well being. Instead of asking a general “how are you” we specify food so it’s partially making sure the person is healthy by having eaten already or potentially an invitation to get food together if the person has not eaten,” she wisely explained.

Thais don’t just eat to live, but live to eat. I think that’s one reason why Thais usually eat more smaller meals throughout the day rather than just three big ones like Americans. So they can eat all the time.

A life centered around eating amazing food and making sure others have eaten—sigh. How I miss that.

So today after saying hello to your friend ask if they have eaten yet and what they ate. See if they get freaked out, or like that you asked them. It’s a good test to see how Thai they are.

How Thai are you?