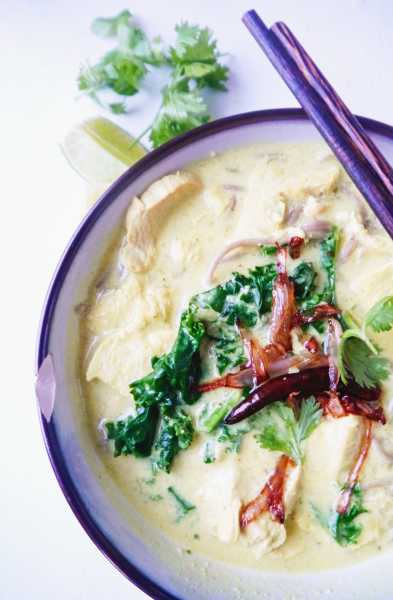 I could feel my stress float away and relaxation take its place, like it always does whenever I’m about to open my new issue of Bon Appetit. But before I could open it, Thai Hubby saw the glistening pictures on the cover of what looked like a Thai version of a chicken soup, and freaked out.

My Thai Hubby doesn’t usually get overly excited about many things, since he is a chill Thai guy, so that woke me up that I had to make Chicken Khao Soi as soon as possible.

Especially since I had never eaten it before!

This Burmese-influenced dish is popular in the cooler, mountainous area of northern Thailand, and isn’t found much in Bangkok. Like in America and most countries, Thailand has regional food.

Soups, like Sukhothai Noodle Soup are hard to find, made well, outside of Sukhothai. Chicken Khao Soi is another one of those dishes that when you are up north, you just have to stop and eat it before going south. 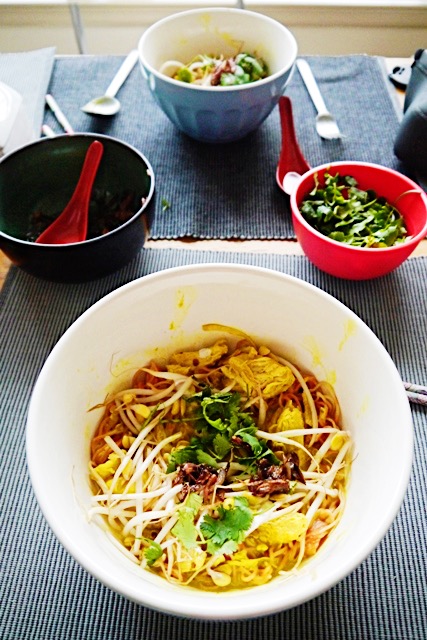 I followed the Bon Appetit recipe, with some tweaks of my own, and we loved it! My Thai Hubby hadn’t eaten it in so long he couldn’t tell if the recipe was authentic or not, but whatever we concocted was approved by his Thai tastebuds.

Then two weeks later we met friends who had been missionaries in Southeast Asia, and had lived in northern Thailand for awhile. When I asked them to come to our place for Thai food, we asked if they would want Chicken Khao Soi for dinner.

They said our version was soooo good, but the one they had had in Thailand was more of an orange-ish color than yellow, probably because the curry powder and turmeric in America isn’t quite the same as in Thailand.

But either way, all of us wanted seconds of the cozy egg noodles, creamy coconut milk broth dyed a bright, happy yellow from the turmeric, which has healing properties in it and so does the ginger!!, plus FRIED shallots sprinkled on top? Curl beside a roaring firing cozy happiness in one bowl!

Show me your Khao Soi with Chicken creation on Instagram! Tag me @thaifoodie, I want to see!!

Have you ever had Chicken Khao Soi before??

Who can resist Khao Soi with Chicken? Cozy egg noodles, creamy coconut milk broth dyed a bright, happy yellow from the turmeric, which has healing properties in it and so does the ginger!!, plus FRIED shallots sprinkled on top? Coziness and happiness all in one bowl!