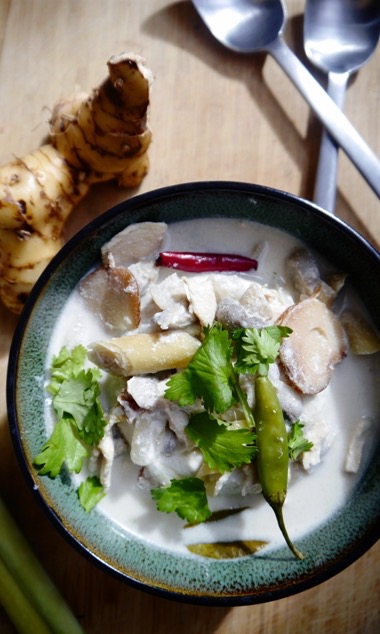 Soothing. That’s what comes to my mind when I think of Tom Kha Gai, aka Thai Coconut Chicken Soup with Galangal. It calms my heart with every bite.

But as you know my dear Thai hubby isn’t a fan of coconut milk in his dinner. But last week my sweet friend gave birth to a little baby boy. I texted her to ask what Thai dish she wanted me to make for her, and she replied, “Anything coconutty please!!”

Per her request, I got to make Tom Kha Gai!

What makes this dish stand out is the kha, or galangal. I like to think of it as the big brother to ginger. In my humble opinion, it’s tougher and stronger than ginger and doesn’t mind taking the lead. Make sure you add lots of it to your soup to accentuate its awesome flavor. 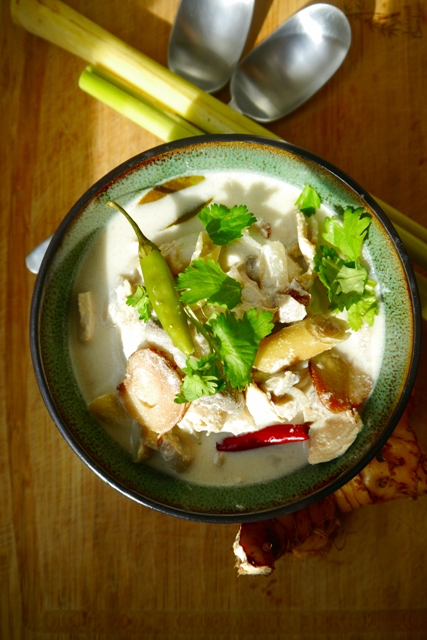 And quick tip with the Thai chilies when using them in any Thai soup. Make sure you not only smash them, but smash them so their insides ooze out a little.

After my Thai hubby’s first sip of my tom kha gai, he said, “Did you smash the chilies?”

“Yes! And I added four of them! So why can’t we taste them?”

He picked the delicate green Thai chili out of the soup pot to critique my handiwork and said, “You need smash it so the seeds are showing, that’s where all the spice is.” 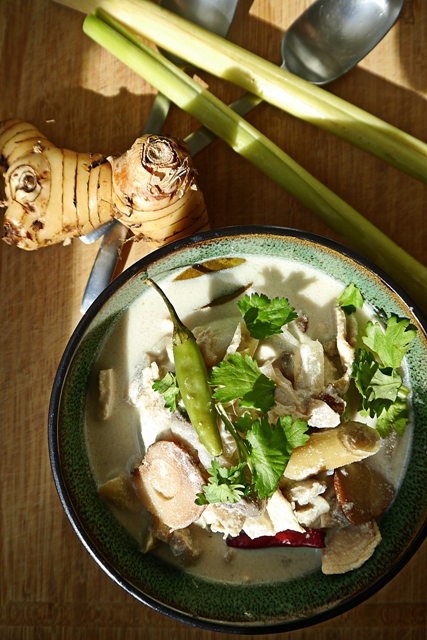 Oops! But as my kids and I often sing, (thanks to Daniel Tiger), it’s ok to make a mistake, just see how you can fix it, and do things different next time!

Next time I pounded up the Thai chilies in my mortar and pestle and then the spicy flavors mixed with the sour and the sweet coconut milk, and my tom kha gai was paradise on a spoon.

Try it out, and tag me on Instagram, @thaifoodie, so I can see your beautiful handiwork!

LOVE all the heart-warming flavors in Tom Kha Gai: coconut milk, chicken, kaffir lime, lemongrass, galangal, Thai chili peppers and lime juice! Coziness with a kick in a bowl! The perfect way to warm up any day!

This is a rich soup since I made it one part coconut milk and one part chicken broth. If I’m making this for my friends who love rich soups, I keep it this way. If I’m making it for my Thai hubby who doesn’t like it so rich, I do one part milk to two parts stock.

If you taste your soup after the chicken is cooked, and it doesn’t seem like you can taste the herbs, the herbs might not have had the chance to infuse the broth enough. That’s happened to me! I let it cook on low for a few minutes longer to draw out more of the flavors.

But keep in mind, that even as your herbs sit in the soup in your fridge, more of the flavors will come out, so I prefer making this soup ahead of time to let the herbs infuse the broth while it sits and warming it up before I serve it.

Don’t forget to pin it up for next time!